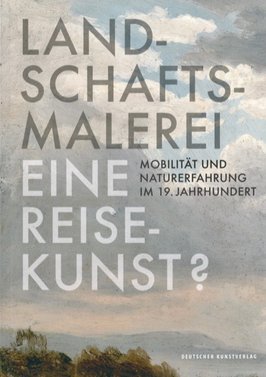 Ed. for the Christoph Heilmann Foundation at the Lenbachhaus by Claudia Denk and Andreas Strobl, Berlin.

Deutscher Kunstverlag, Munich 2017  With a preface by Christoph Heilmann and Matthias Mühling

This anthology is the result of an international symposium held at the Lenbachhaus in Munich in 2015, dealing with the importance of artists’ travels in the emerging plein air painting of early 19th century. The symposium was organised in conjunction with an exhibition of works from the collection of the Christoph Heilmann Foundation. This is an outstanding collection of Romantic landscape sketches, including works by French painters of the Barbizon school such as Camille Corot and Théodor Rousseau, German artists like C. G. Carus, Louis Gurlitt and Carl Rottmann, and even Scandinavians such as Johan Christian Dahl, Thomas Fearnley, and Gustaf Wilhelm Palm.

The book brings articles by leading scholars of the period, e.g Werner Busch, Michael Clarke, and Bernhard Maaz, and also includes an essay by Dr. Knut Ljøgodt, “’Travel, travel they must’: Peder Balke and the Romantic discovery of Norway”.