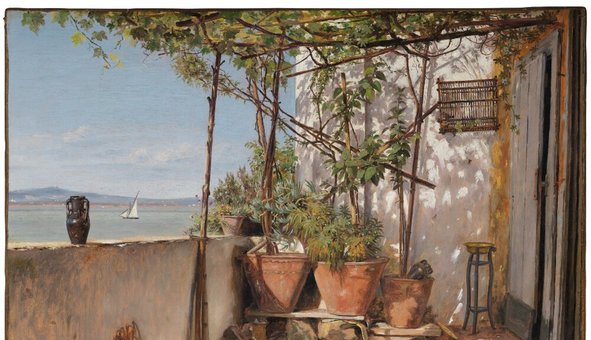 2020 seems to be is a promising year for Nordic art on the international scene. We are all very excited about The Golden Age of Danish Painting – which formerly has been on show in the national galleries of Stockholm and Copenhagen – that will open in Petit Palais in Paris in April. While the French audience earlier have had the opportunity to see exhibitions on individual artists – such as C.W. Eckersberg – this will be the first major presentation on Danish golden age painting in Paris, with more than two hundred works.

The US audience are in luck this year and will be able to acquaint themselves with different aspects of Nordic art. True to Nature is an exhibition dedicated to open-air painting in Europe in the 19th century. Opening in the National Gallery of Art, Washington DC already in February, it will go on to the Fondation Custodia, Paris and Fitzwilliam Museum, Cambridge. The show includes Scandinavian artists, namely Danish pioneers like Eckersberg, Købke and Kyhn, alongside European masters such as Corot, Turner and Constable.

In the summer, a monographic exhibition at the Clark Art Institute, Williamstown, Massachusetts will be dedicated to the paintings and prints of the Norwegian artist Nikolai Astrup. The exhibition will later travel to Prins Eugens Waldemarsudde, Stockholm and KODE Art Museums and Composer Homes, Bergen. The project is made possible thanks to the Savings Bank Foundation’s long-term dedication to Astrup’s art.

It interesting to notice an increased interest in Nordic art in a central institution like the Metropolitan Museum of Art in New York. A generous donation last year from the collector and patron Christen Sveaas has enabled the museum to present a permanent display of masterpieces by Norwegian romantics Johan Christian Dahl and Peder Balke.

Here at NIA – Nordic Institute of Art, we are very excited about the opening of Edward Burne-Jones: The Pre-Raphaelites and the North at KODE in Bergen in February – the first presentation ever of the Pre-Raphaelite painter and design pioneer in Scandinavia and the result of a collaboration between KODE, Tate Britain, Waldemarsudde and NIA.

We also look to this year’s TEFAF in Maastricht in March, where NIA will be present once again. During the past few years, the fair has presented us with an interesting selection of Nordic art. Especially 19th century landscape sketches and studies seem to be popular.

Nordic art receives increasingly international attention, something which is the result of a long-term dedication from different institutions and organizations as well as individual curators and scholars, both in Scandinavia and outside. In our experience, the most successful projects are those that are the results of collaborations across institutions and borders. Such projects also stimulate academic expertise within the organizations as well as enthusiasm in the art community, qualities necessary to maintain an interest in Nordic art history also in the years to come.