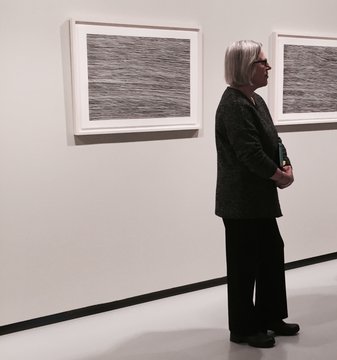 Inger Johanne Grytting (b. 1949 in Lofoten), left her Native Norway in 1970 to study art in New York. Soon she settled permanently, and became a part of the pulsating arts community that emerged on Manhattan in the 70s and 80s. She received first hand impulses from the Abstract Expressionists and gradually developed an aesthetic that today is often described as post-minimalist, as it merged the sparseness of Minimalism with an intuitive and emotive approach. In Norway, Grytting is recognised as an important link between the American and Norwegian art scenes, and her loft on the Bowery in Lower Manhattan has been a central meeting point for American and Norwegian artists and intellectuals for decades.

In New York, Grytting and her husband, the literary critic Mark J. Mirsky, are also notable figures in the American literary world, as longstanding editors and publishers of the influential magazine Fiction, which has published many up-and-coming writers alongside with eminent authors of international renown. Inger J. Grytting is represented in several public and private collections, such as the National Museum of Art, Architecture and Design, Oslo, Northern Norway Art Museum, Tromsø, Savings Bank of Northern Norway’s art foundation, Tromsø, Jan Groth Collection in Stavanger Art Museum, and the Erling Neby Collection, Oslo.