Dr.Phil. Knut Ljøgodt is a Norwegian art historian who studied at the University of Oslo, the Courtauld Institute of Art, London, and the Istituto di Norvegia in Roma. He received his Doctorate from the University of Tromsø. Ljøgodt has been a Curator in the National Gallery, Oslo, Director of Northern Norway Art Museum, Tromsø, as well as Founding Director of Kunsthall Svalbard, Spitzbergen. He is today heading the Nordic Institute of Art, which he co-founded in 2017.

Dr. Ljøgodt is a leading scholar on Nordic and European 19th century art, including Romantic landscape painting and history painting, Symbolism and the Pre-Raphaelites. He has also worked extensively with modern and contemporary art. Among other fields of interest could be mentioned history of collecting, museology, and art from the Arctic areas.

Ljøgodt is the author and co-author of a series of publications of which we can mention Historien fremstilt i bilder (Scandinavian History Painting), Pax 2011, Knud Baade: Moonlight Romantic, Orkana 2012, Paintings by Peder Balke, National Gallery, London & Yale University Press 2014 (together with Chris Riopelle and Marit Lange), Treasures: Selected Works from the Collection of Northern Norway Art Museum, Teknisk Industri 2016, Sverre Bjertnæs, Arnoldsche Art Publishers 2019 (together with Joakim Borda-Pedreira), as well as the forthcoming Peder Balke: The Gundersen Collection (2020). In addition, he has curated exhibitions on and written about contemporary artists such as AK Dolven, Olav Christopher Jenssen, David Hockney, Joan Jonas, Kjell Varvin, Sverre Bjertnæs and others.

Knut Ljøgodt is presently working on the catalogue raisonné on Peder Balke as well as other projects under the auspice of the Nordic Institute of Art. He is also co-curating the exhibition The Atlantic for Henie Onstad Art Centre (2021). He is a Trustee of the Norwegian Museum of Cultural History (Stiftelsen Norsk Folkemuseum), Kunsthall Trondheim, Bogstad Manor, and the Nordic Association for Romantic Studies. 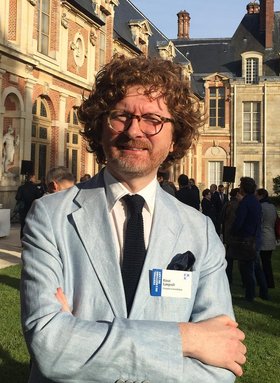