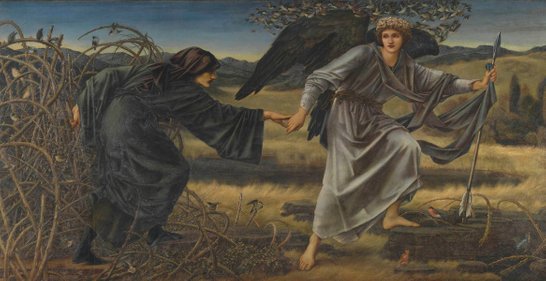 The exhibition is organised in close collaboration with Tate Britain, which this winter presents Edward Burne-Jones in London, the first major show on the artist for many years. Director of Tate Britain, Alex Farquharson, says about the Scandinavian tour: ‘Tate is delighted to be supporting the Edward Burne-Jones exhibition at Prins Eugens Waldemarsudde, Stockholm, and KODE – Art Museums and Composers Homes, Bergen. This is a fantastic opportunity to present the work of one the great British artists to a new audience in Scandinavia. Over thirty masterpieces usually on display in London at Tate Britain, the home of British art from 1500 to the present day, are being lent to this landmark exhibition. Renowned for otherworldly depictions of beauty inspired by myth, legend and the Bible, Burne-Jones was a pioneer of the symbolist movement and the only Pre-Raphaelite to achieve world-wide recognition in his lifetime. We are grateful to the Nordic Institute for Art (NIA) for their assistance in achieving this collaboration.’

The first venue on the Scandinavian tour will be Prins Eugens Waldemarsudde, Stockholm (14 September 2019 – 26 January 2020). Director Karin Sidén says: ‘The exhibition offers a unique opportunity for our audience to explore the paintings, drawings and textiles of Edward Burne-Jones, as well as his impact on Scandinavian art and design. It will be a striking show, curated in collaboration with leading scholars on the artist and the Pre-Raphaelite movement.’ There is a connection between Burne-Jones and Waldemarsudde, Dr. Sidén explains: ‘The exhibition will be perfect in our programme as Prince Eugen (1865– 1947), the painter and the founder of our museum, was influenced by the Symbolist movement and even met Edward Burne-Jones in London in the spring of 1896.’

The exhibition goes on to KODE – Art Museums and Composers Homes, Bergen (15 February – 31 May 2020). Director Petter Snare states: ‘We are proud to introduce one of the greatest European artists of the late 19th century for the very first time in Scandinavia; a project that also reflects the international ambitions of our museum.’ KODE Bergen is known for one of the world’s finest collections of Edvard Munch Norway’s ‘painter of the soul’, and Mr Snare adds: ‘We find it appropriate to present the symbolist pioneer Edward Burne-Jones in the same museum as the works of our own Edvard Munch.'

In a joint statement, Alison Smith and Knut Ljøgodt say: ‘Edward Burne-Jones is one of the greatest visionary artists of the 19th century. To introduce his art to Scandinavia is the fulfilment of a long-time dream. We are happy that Burne-Jones will be presented at such distinguished institutions as Waldemarsudde and KODE, in close collaboration with Tate Britain and Nordic Institute of Art.’

- Sir Edward Coley Burne-Jones (1833–1898) is one of UK’s leading painters and designers, and a representative of the Pre-Raphaelite, Arts & Crafts, and Symbolist movements.

- The exhibitionEdward Burne-Jones is on show at Tate Britain until 24 February 2019, and consists of some 150 works. It is curated by Alison Smith with Tim Batchelor.

- Edward Burne-Jones: The Pre-Raphaelites and the North will be presented at Prins Eugens Waldemarsudde, Stockholm 14 September 2019 – 26 January 2020, and KODE – Art Museums and Composers Homes, Bergen 15 February – 31 May 2020, organised in collaboration with Tate Britain and NIA – Nordic Institute of Art. It is initiated by Alison Smith and Knut Ljøgodt, who will also act as the exhibition’s curators, together with Karin Sidén and Line Daatland.

- The exhibition will be accompanied by a publication that will present the works of Edward Burne-Jones as well as explore his impact on Scandinavian art and design.

- Tate Britain is UK’s national museum for British art from ca. 1500 to the present day.

- Prins Eugens Waldemarsudde was originally built as the residence of the Royalty, artist and patron, Prince Eugen of Sweden. It is today a museum with a programme of Scandinavian and international exhibitions from the 19th and 20th centuries.

- KODE – Art Museums and Composers Homes, Bergen – is one of Norway’s leading museums, specialising in both art and design, and includes important collections on e.g. J.C. Dahl and Edvard Munch.

- NIA – is an independent organisation founded with the mission to stimulate research and promotion of historical and modern art from the Nordic region in an international context, as well as introducing international art to the domestic scene.